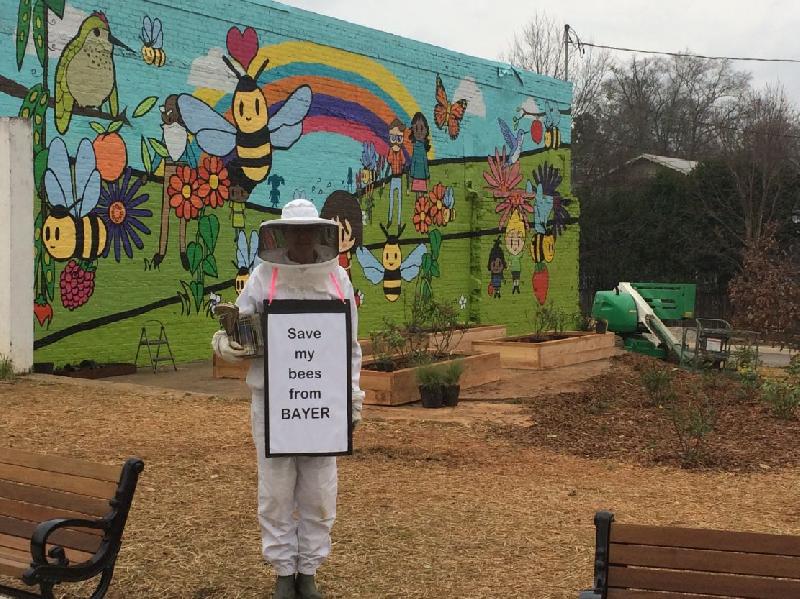 Deborah Palmer in front of the new mural in Oakhurst

Deborah Palmer isn’t happy about a new mural that appeared in her Oakhurst neighborhood.
The mural is part of the “Feed a Bee” public service announcement and depicts happy pictures of people, flowers and, of course, bees. It’s part of an initiative by Bayer, a company that’s been accused of creating a pesticide that’s killed off honeybee populations. A press release from the city of Decatur says the project’s mission is “to bring awareness to the decline in bee populations.” The company also planted flowers in front of the mural.
The mural has angered some in the Oakhurst community who, like Palmer, think the ad paints a happy picture to obscure an ugly truth. The Feed a Bee Campaign is an initiative of the Bayer Bee Care Center in North Carolina, according to a spokesperson. The New York Times reported in 2013 that, “Bayer is one off the major producers of a type of pesticide that the European Union linked to the large-scale die-offs of honeybee populations in North America and Western Europe.” To read the full story, click here.
Palmer said the mural is an attempt to gloss over the bad press the company has received over its pesticide.
“As a beekeeper and longtime resident of Oakhurst, I am deeply concerned about the funding by Bayer Corporation of the mural promoting ‘saving bees’ which is being installed this week in Oakhurst village,” Palmer said.
Bayer contends that the evidence doesn’t support claims that its products are killing bees.
Company spokesperson Bill Marks said, “While some contend that neonicotinoids, a class of agricultural pesticide made by Bayer and other companies, are affecting honey bees, the facts don’t support this. Extensive research has shown that colony decline correlates well with the presence of parasitic mites, particularly the Varroa mite and diseases, but not with the use of ‘neonics.'”
Palmer disagrees.
On Saturday, Feb. 20, she donned her beekeeping suit and stood near the mural, which is on the outside wall of a building that houses the Oakhurst Market and One Step at a Time shoe store.
Palmer handed out information sheets regarding Bayer to people passing by.
“In my opinion, it is dishonest and deceitful that a company that kills bees has a public relations campaign for saving them,” Palmer’s information sheet says.
Marks said the company has a proven track record of protecting bees.
“Bayer has been supporting bee health for nearly 30 years,” Marks said. “The company created some of the earliest miticides to control mites in honey bee hives. Bayer has long recognized the critical intersection between apiculture and agriculture because honey bees pollinate many of the foods we eat. In fact, Bayer is one of the largest purchasers of honey bees in Canada to pollinate the company’s canola crop.”
source: Dan Whisenhunt, Decaturish