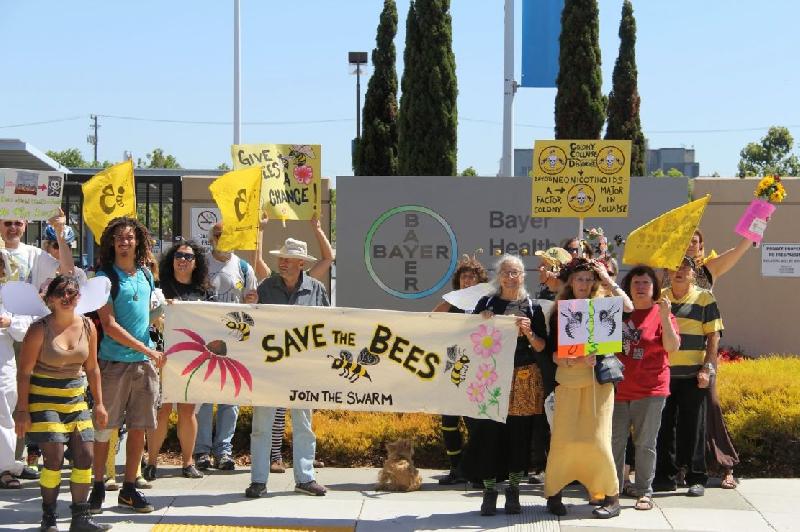 rally at Bayer plant Berkeley in 2014

Sep. 19, 2015 — Farmers, beekeepers, environmentalists, students, bee-lovers and members of the North Carolina community rallied in front of the North Carolina Capitol building today and delivered more than 500,000 petition signatures urging Bayer to stop selling bee-killing neonicotinoid pesticides. Bayer is one of the leading manufacturers of neonicotinoids -- a key driver of bee decline. Bayer was invited to the rally and petition delivery by environmental and consumer organizations on behalf of the 500,000 people that signed petitions to Bayer, but the company has not responded to the invitation.

“Bayer masquerades as a champion of bee health while doing absolutely everything in its power to protect its pesticide profits and keep its harmful products on the market,” said Tiffany Finck-Haynes, food futures campaigner at Friends of the Earth. “If Bayer is serious about bee health, it must listen to the more than 500,000 Americans calling on it to stop selling bee-toxic pesticides, for the sake of our environment, food system and nation’s food supply.”

“North Carolina’s $78 billion agricultural industry is too important to risk long-term environmental health for near-sighted financial gains,” said Preston Peck, policy advocate, at Toxic Free North Carolina. As the state with the largest Beekeeping Association in the Nation, North Carolinians obviously have a passion for pollinators and must work together to protect their habitat from many factors, including systemic pesticides like those produced by Bayer CropScience.

“I have witnessed the majority of crops that can be grown in NC grown organically. The question I have is why do we need these pesticides at all?” said Tony Kleese of Earthwise Organics, LLC.

“As a student at a renowned research institution, I’m appalled by Bayer’s willful disregard of the research linking neonicotinoid pesticides to global bee-declines and the impacts this will have on our food supply and environment,” said Gaby Benitez, president of Food for Thought, Duke University. “I urge Bayer to take steps towards a greener future for future generations.”

"It's time for Bayer to get with the program and protect our precious pollinators. These half a million people include Bayer's customers, shareholders and investors -- they will be watching closely to hold Bayer accountable on this issue," said Emma Pullman, lead campaign strategist, at SumOfUs.

“North Carolina is in a unique position to lead the way against neonicotinoids because of our huge agricultural industry and being the home of the world’s largest producer of these systemic pesticides, Bayer CropScience. I have been working on legislation that will limit the use of these insecticides because of the uncertain environmental impact that could burden generations to come,” said Representative Pricey Harrison.

In April 2014, Friends of the Earth released a report, “Follow the Honey: 7 ways pesticide companies are spinning the bee crisis to protect profits,” which documents the deceptive tactics used by agrochemical companies including Germany-based Bayer, Switzerland-based Syngenta (NYSE: SYT) and U.S.-based Monsanto (NYSE: MON), to deflect blame from their products’ contributions to bee declines and delay regulatory action on neonicotinoid pesticides.

Last week, the Ninth Circuit Court of Appeals rejected the EPA’s approval of the neonicotinoid insecticide “sufloxaflor.” The court concluded that the EPA violated federal law when it approved sulfoxaflor without reliable studies regarding the impact that the insecticide would have on honeybee colonies and ruled that sulfoxaflor may not be used in the U.S.

The 500,000 petition signatures were gathered by Friends of the Earth, League of Conservation Voters, MoveOn, Organic Consumers Association, Save our Environment, Sierra Rise, SumOfUs, and Toxic Free North Carolina.

Bee supporters press to curb use of pesticides

Dozens rally at Capitol to urge chemical companies, growers to change their ways / But companies say pesticides are safe when used properly

September 19 -- If companies won’t stop making a certain group of pesticides that can kill honeybees and other pollinators, and if growers won’t stop applying the chemicals to seeds and fields, consumers will have to force change by refusing to buy the foods produced from the yields, environmentalists said Saturday.

“Be an activist with every bite,” Tony Cleese, a longtime advocate for organic agriculture in North Carolina, told about three dozen people gathered for a rally on the Capitol grounds Saturday morning. The event was organized by Toxic Free NC, Friends of the Earth, SumOfUs.org and other groups that say the overuse of pesticides is killing bees and may threaten humans.

The groups are especially critical of Bayer CropScience, a German company whose American headquarters are in Research Triangle Park, because the company manufactures pesticides called neonicotinoids, which many researchers say have played a role in large bee die-offs. The American Beekeeping Federation says that most of the crops produced in the United States would not exist without honeybees, which pollinate plants as they gather pollen and nectar from blooming plants.

Bayer, Dow Chemical Co. and others that make, sell or use neonicotinoids say the pesticides are safe as long as they are used correctly. The companies blame misapplication and other stressors, including genetic weaknesses, a parasitic mite and loss of habitat and forage, for reducing bee populations. Another problem, referred to as colony collapse disorder, in which nearly all the bees in a hive disappear except for a few worker bees and the queen, has not been seen in U.S. hives over the past couple of years.

Neonicotinoids are used to treat seeds before they are planted or are sprayed on plants after they emerge to protect against insects that suck or chew. The pesticides are used on most of U.S. corn and canola crops, on much of the cotton, sorghum, sugar beets and soybeans, and on many fruits, vegetables and grains. Neonicotinoids are the most widely used pesticides in the world, and Bayer makes some of the most popular brand names.

Preston Peck of Toxic Free NC said more than 400 studies have indicated that neonicotinoids have played a role in the loss of bee colonies since the chemicals began to proliferate in the 1990s.

The European Union temporarily banned the use of neonicotinoids, but partially lifted the ban this summer to allow the chemicals’ use on an infestation of cabbage stem flea beetles and other pests. Canada has said their use must be cut by 80 percent on corn and soybean crops by 2017. The activists who gathered Saturday said they have collected 500,000 signatures on petitions asking Bayer to stop making neonicotinoids.

The two sides don’t even agree on whether there is a genuine crisis in the bee world. Bee populations first became news in the mid-2000s, when beekeepers began noticing large numbers of dead bees in their hives. Typically, beekeepers had been losing about 14 percent of their colonies during seasonal die-offs, but in some years in the past decade, the die-offs have taken 30 to 40 percent of colonies, with the highest losses usually occurring over the winter.

And yet, the U.S. Department of Agriculture’s annual survey of beekeepers recently reported the highest number of bee colonies in a decade – 2.7 million in 2014 – due to beekeepers’ splitting their hives or starting new ones.

Becky Langer, project manager for the North American Bee Health Program, housed at Bayer’s RTP campus, said neonicotinoids are safe as long as users read and follow instructions. For example, she said, the chemicals should not be applied to plants when they’re flowering, and are best used in the evening after bees have returned to their hives or in the early morning before they have emerged.

Tiffany Finck-Haynes, food futures campaigner at Friends of the Earth, traveled to Raleigh from Washington to speak at the rally. She said Bayer’s bee research and the $100,000 grant it pledged this year to the N.C. Department of Transportation to provide bee habitat in roadside flower beds are public-relations tools. Pesticides are a lucrative industry, Finck-Hayes said, and whatever the company says publicly, “their interest is protecting their pesticide profits.” By Martha Quillin