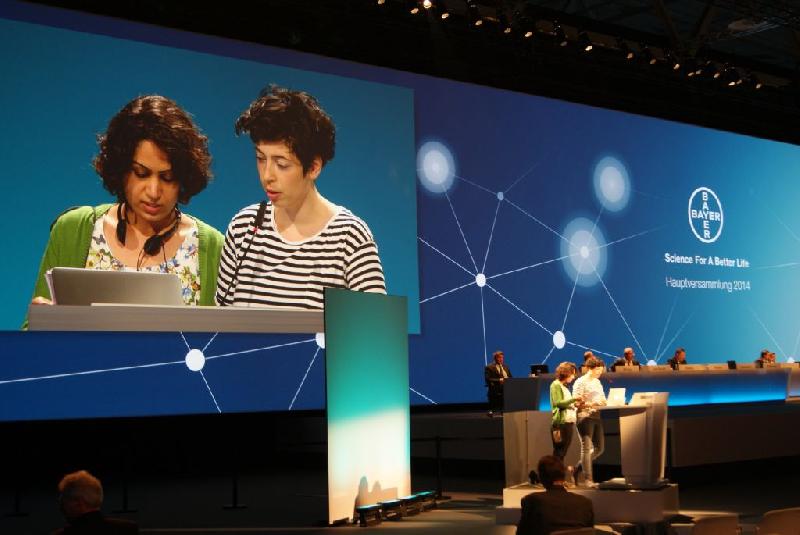 Journalist Ruhi Kandhari from Delhi speaking at the Bayer ASM on April 29, 2014

The following paper showcases flouting of ethical norms by multinational pharmaceutical companies, particularly Bayer, while conducting clinical trials in India. These are based on the fifty-ninth report of the “Parliamentary Standing Committee on Health and Family Welfare” examining the functioning of the government body Central Drugs Standard Control Organisation (CDSCO) published in May, 2012; an ongoing public interest litigation hearing in the Supreme Court of India; and media reports.

Media such as BBC, NBC, French TV, Al Jazeera have documented serious, documented cases of poor, illiterate citizens including children of India being used as 'guinea pigs' by MNC drug manufacturers in India. Either because these trials are not allowed outside India or because such trials are cost prohibitive in the country of origin.

The Indian Parliamentary Standing Committee report, states that “most of the ills besetting the system of drugs regulation in India are mainly due to the skewed priorities and perceptions of CDSCO” and that there is ”sufficient evidence on record to conclude that there is collusive nexus between drug manufacturers, some functionaries of CDSCO and some medical experts.”

An ongoing public interest litigation investigated this “nexus”. The petitioners have explained why this “nexus” has developed? Who it favours? and Who are the victims?

The petition states that entire focus of pharmaceutical industries for conducting stage I and II trials is on the developing/third world countries because clinical trials are the most labor intensive, time consuming and costly part of the drug development process; India has a large population that has not been exposed to health-care creating a large pool of ‘treatment naïve patients’, who are also largely poor and illiterate making them inexpensive recruitment targets; and lax regulations relating to drug trials lead to easy approval of trials with little oversight.

Media reports have also consistently showcased individual instances wherein drug manufacturers have influenced policy making and implementation. On national level, the Drug and Cosmetic Act was amended in 2005 in order to make it easier to conduct clinical trials in India. Trials have grown at a great pace since then. The Third World Network had estimated that in 2010, 2 million people in India were taking part in Clinical Trials.

The Parliamentary Standing Committee reported that 2,374 people have died, some as young as in their 30’s between 2007 and June 2012 in clinical trials. However, drug manufacturers consider only a limited number of deaths as clinical trial related deaths. They say that subjects of clinical trials can suffer from serious injury or even die as a result of trial. However, there is no system of third party or independent audits of serious side effects or deaths in India to counter this conflict of interest.

Further, media reports have consistently reported that not even one patient has been compensated for serious injury short of death even though serious injuries are much more common than deaths. As against what BAYER has paid to the surviving dependents, damages of about over USD 5000 in Europe and the United States.

Clinical trials of Bayer's Rivaroxaban have accounted for a large number of trial related deaths and were repeatedly used despite widespread fatalities. Rivaroxaban is one of the experimental New Chemical Entities (NCEs) approved for Clinical trials in India.

The Petitioners in an affidavit have noted that in the year 2012, out of which 125 died on account of clinical trial of Rivoroxaben by Bayer, in the letter which was written by Ministry of Health and Family Welfare dated 26.04.2011 to the Parliament Secretariat. Out of
125 deaths which had taken place due to Rivoraxaban, Bayer paid compensation to only 5.

Even if the official data are incomplete, the figures from the Indian Government clearly contradict the statement made by former BAYER boss Werner Wenning at the Annual Stockholders' Meeting 2010, when he said there had been no serious incidents during clinical studies in India.

Parliamentary Committee has stated that the drug regulatory system in the country suffers from several deficiencies and shortcomings, “some systemic and several man made”. The mission of CDSCO is to “meet the aspirations…. demands and requirements of the pharmaceutical industry.” As against this, the Food and Drugs Administration (USFDA) mission in USA stated “protecting the public health by assuring the safety, efficacy, and security of human and veterinary drugs,” in UK, the Medicine and Healthcare Regulatory Authority’s (MHRA) mission is “to enhance and safeguard the health of the public by ensuring that medicines and medical devices work, and are acceptably safe” and in Australia, the mission statement of Therapeutic Goods Administration
(TGA) states: “Safeguarding public health & safety in Australia by regulating medicines….”

In addition to the influence on Indian government policies, neither the government bodies or the pharmaceutical companies keep every discussion and document on clinical trials confidential, away from public scrutiny.

Another instance of the “nexus” between government and pharmaceutical companies that lead to lack of transparency and accountability in conducting clinical trials the ethic-committees. Once the trial is permitted, the entire responsibility of monitoring of trials and protecting the interests of patients has been given to the Ethics Committees (Ecs).

These committees are duty bound to safe-guard the rights, safety and well-being of all trial subjects, however conflict of interest as doctors who conduct the trials frequently sit on the ethical committees. Such is the laxity in the guidelines that almost anyone can be part of such a body. As per law, any 7-12 private individuals can constitute themselves as Independent Ethics Committees. They are not accountable to anybody. The petitioners have argued on the bases of ample evidence that “these doctors often receive benefits from the trial sponsors which sometimes becomes the main source of their income, creating a glaring conflict of interest. Doctors conducting trials also receive commissions per patient recruited, creating an incentive to enroll more people in the trials.”

The Parliamentary Standing Committee scrutinized some random cases to assess the credibility and utility of the opinions of members of the ethics committee. It stated that in case of Bayer's rivaroxaban the three opinions (from Professor of Orthopaedics, All India Institute of Medical Sciences, New Delhi; Consultant at Dayanand Medical College, Ludhiana and Professor of Orthopaedics, St. Johns Medical College, Bangalore) on were merely ditto copies of each other.