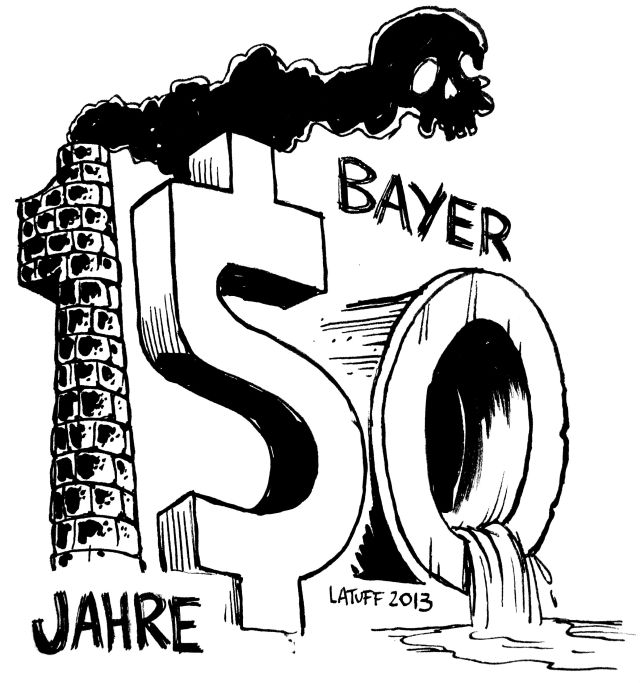 Dark Side of Company History ignored

Tomorrow the chemical and pharmaceutical company BAYER is celebrating the 150th anniversary of its foundation. In a birthday celebration the German chancellor Angela Merkel described BAYER as an “outstanding advertisement for Germany”. However, none of the commemorative publications is mentioning the numerous crimes the corporation has committed. Instead of acknowledging responsibility for slave labor, poison gas and fatal pharmaceutical products, the dark side of the company's history is completey ignored.

On August 1, 1863 business¬man Friedrich Bayer and dyer Johann Friedrich Weskott founded the company "Friedr. Bayer et comp". They initially produced synthetic dyestuffs but the range of products grew significantly over the years. In 1881, BAYER was made a joint stock corporation and developed into an international chemical company. In 1925 the firm became part of the IG FARBEN conglomerate.

For its 150th anniversary BAYER has organized numerous celebrations. More than 1,000 guests attended an event in Cologne, including German Chancellor Angela Merkel and North Rhine-Westphalian State Premier Hannelore Kraft. A specially built airship is promoting the company on all five continents. However, the unpleasant periods of the company’s history have totally been omitted from the celebrations. Topics such as environmental contamination, pesticide poisoning, worker protests and collaboration with the Third Reich are simply ignored.

Philipp Mimkes from the Coalition against Bayer Dangers said: “Being a part of the infamous IG Farben, BAYER was involved in the cruelest crimes in human history. A subsidiary supplied Zyklon B for the gas chambers. The company built a giant new factory directly at Auschwitz. To accommodate the slave workers, the corporation operated its own concentration camp. More than 30,000 labourers were worked to death.” The company's commitment to supply fuel, munitions and rubber was vital for Hitler to wage international war.

More facts from the corporation´s history:

=> Every BAYER brochure includes a reference to the invention of ASPIRIN in 1898, but makes no mention of the fact that the company almost simultaneously introduced HEROIN onto the market as a cough treatment. Very shortly after its market launch, physicians pointed out the addictive potential. Nevertheless, BAYER carried out a global advertising campaign for 15 years.

=> Carl Duisberg, the BAYER General Director for decades, was personally involved in the development of poison gas in World War I and pushed for its use on the front – contrary to international law. Duisberg demanded the deportation of tens of thousands of Belgian forced laborers and encouraged the annexation of large areas of Eastern Europe.

=> Duisberg strongly supported the merging of the German chemical industry to create the IG FARBEN. The Group, which was founded in 1925, was closely involved in the war of conquest of the Third Reich. The IG FARBEN followed the armed forces into the conquered countries of Europe and took over coal mines, oil production and considerable parts of the chemical industry there.

=> In the war criminal trials in Nuremberg, IG FARBEN faced a trial of its own. The verdict states the following: “It is undisputed that criminal experiments were undertaken by SS physicians on concentration camp prisoners. These experiments served the express purpose of testing the products of IG FARBEN.”

=> The managers condemned in Nuremberg were able to continue their careers unhindered after sitting out their sentences. Fritz ter Meer, for example, became Chairman of the Supervisory Board of BAYER. During his interrogation in Nuremberg, he said that the slave laborers in Auschwitz had “not been made to suffer particularly badly as they were to have been killed anyway.”

=> In BAYER laboratories, research was carried out into chemical war gases also during the Third Reich. The inventor of SARIN and TABUN, Dr. Gerhard Schrader, was head of the BAYER pesticides department after WW II. During the Vietnam war, BAYER was involved in the development of AGENT ORANGE. Production was carried out at the firm MOBAY, founded jointly by BAYER and MONSANTO.

=> An examination of internal BAYER documents by the New York Times revealed that the company continued to sell contaminated blood plasma causing thousands of hemophiliac patients to be infected with AIDS even when a safer, heated blood plasma version had already been invented. In January 1983, BAYER managers internally acknowledged: “There is strong evidence to suggest that HIV is passed on to other people through . . . plasma products". In August 1983 BAYER employees forsaw in confidential papers a “gigantic epidemic" among haemophiliacs. Nevertheless sales were not stopped. More than ten thousand hemophiliacs paid with their lives.

Unlike other corporations BAYER has not undertaken any independent study of the company's past. According to the Coalition against Bayer Dangers, the Board of Management is responsible for the misleading portrayal of the company history. The Coalition is leading a campaign to shed light on the whitewashed corporate history.