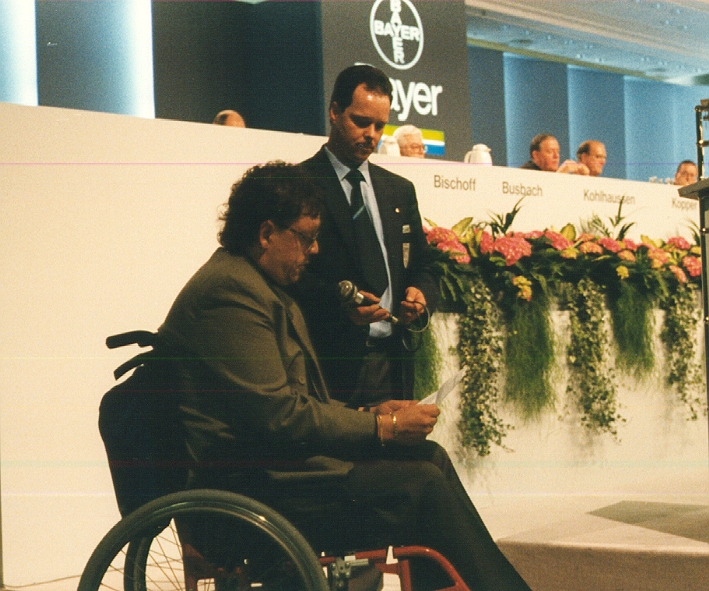 Todd Smith in the Bayer Meeting 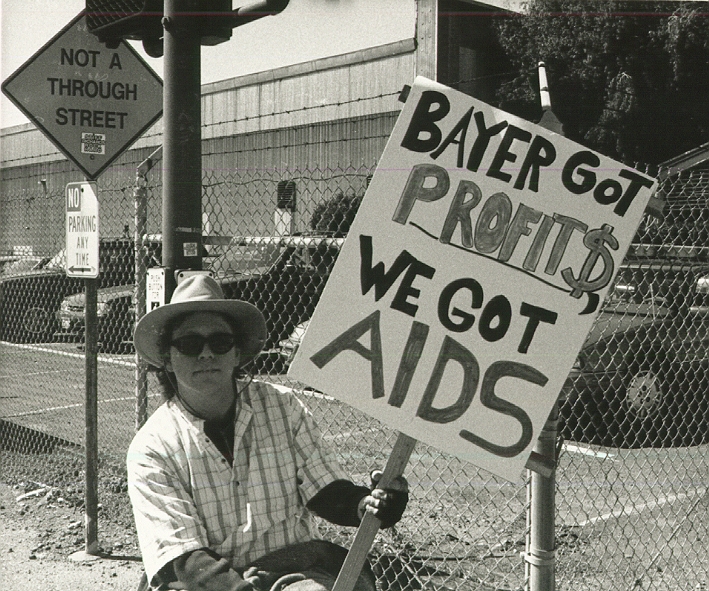 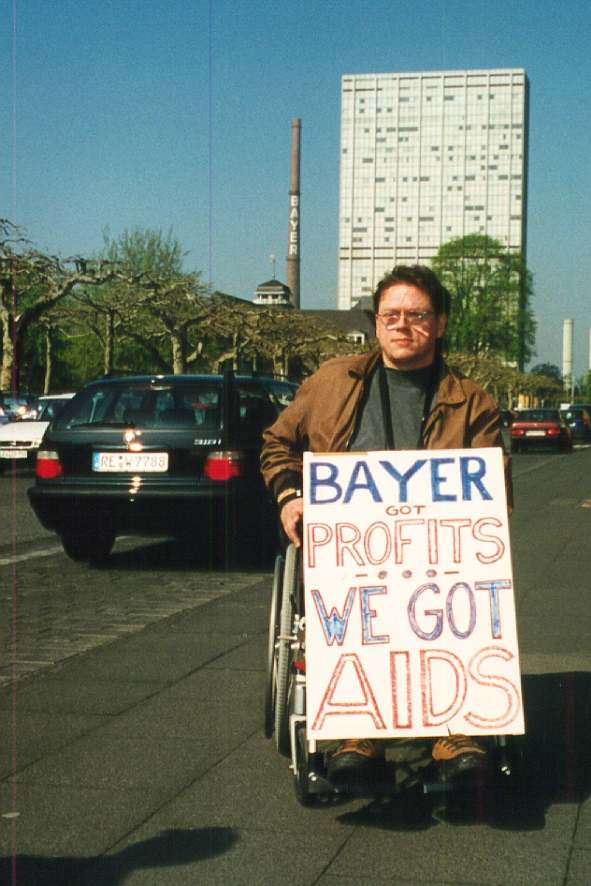 My name is Todd Smith. I come from the USA, and I am a million dollar lifetime Bayer customer. I have hemophilia, and for many years I used Bayer factor medications to treat my condition. This medicine, made from human plasma and manufactured by Bayer, infected me with the AIDS virus.
Many of my fellow hemophiliacs in the USA - thousands - were infected by Bayer products, with thousands more infected worldwide. Many of them are dead of AIDS, and many have also watched wives and children die, unknowingly infected by their partners. All from a product that could have been safe, and should have been safe.
Herr Schneider, why has Bayer never, to this day, warned its customers that they might have been exposed to the AIDS virus through their products, or that their product was being intentionally manufactured from high-risk donors?
Plasma is the liquid part of the blood - without the cells. The plasma used to make the factor medications is also used to make other products, including immune globulins. Immune globulins are human antibodies, used for many purposes around the world - and they are very expensive.
The best plasma used for immune globulins is also the most infectious and dangerous, because the presence of antibodies implies exposure to viruses. It is because of this that the US FDA regulated in the 1970's that plasma used to make Immune Globulins must NOT be used for factor medications.
Following this rule would mean that a lot of factor - that which came from the infectious plasma - would be unused and unsold. Bayer not only used such infectious plasma for factor medications, they actually sought out additional sources of highly infectious plasma for the immune globulins in such places as prisons, inner cities, and gay neighborhoods!
Why did Bayer repeatedly ignore FDA regulations and use infectious plasma to produce factor medications?
So as the AIDS epidemic spread, Bayer actively sought out high-risk plasma donors. By mid 1982 it was clear that the pattern of transmission was similar to that of hepatitis, and that AIDS must be blood borne. Yet Bayer
instituted legal action to deny that this was the case.
It had been known for decades that hepatitis was transmissible through plasma, and technology had evolved since Pasteur to treat products and kill pathogens. This technology was, in fact, in use on other plasma products such as immune globulins, so that when AIDS appeared in the blood supply, they were not affected.
In 1980-84, the choice was made not to use such existing technology, despite its existence, on factor medications. Again, money won out over safety - because the treatment process reduced the amount of factor yielded from plasma by up to one-fourth. That would have reduced profits, so it was not done.
Why did Bayer refuse to use existing viral inactivation technology on factor - technology that would have averted much of the disaster?
Finally, in 1985, Bayer had a virally inactivated product available in the USA. But Bayer did not withdraw the older, untreated product from the market. In fact, Bayer told its distributors of the medicine to make sure they sold the old product before the new.
Why, after the FDA prohibited the sale of untreated factor medications in the United States, did Bayer transport the remaining untreated, unsafe products to developing countries such as Costa Rica - countries without such strict regulations - only to infect hundreds or thousands more?
Around the world, Bayer has reached various, widely differing financial settlements with hemophiliacs in many countries. Japan's government was firm, and forced a reasonable settlement including a large lump sum, annual payments and medical care for life. In my country, Bayer is paying only $100,000 for each life destroyed by its product, and no further payments or benefits of any kind - in a country without socialized medicine.
There are hundreds, like myself, who chose not to accept such a pitiful amount for the egregious actions of this company, and have legal cases pending in US courts.
Why are the human lives in Japan and America worth vastly different amounts, while hemophiliacs in some countries recieve no relief at all? Is Bayer not a multinational corporation?
The liability laws in Germany are very strict compared to ours in the USA....Herr Schneider, would my factor medicine made by your factories in the USA - today and throughout the last eighteen years - meet government requirements here in Germany?
When we hold peaceful demonstrations for product safety outside of your factory in California, why do many of the employees tell us that they cannot speak with us or take our information for fear of losing their jobs? Are Bayer employees who raise safety concerns always threatened so?
Expertise with responsibility? The responsibility to shareholders may be great, but the responsibility to humanity and ethical action is much greater. As long as profits are more important than safety, lives will be lost. Thousands of dead hemophiliacs are testament to this fact. Mr. Schneider, is this the kind of company you want to take into the new millenium?