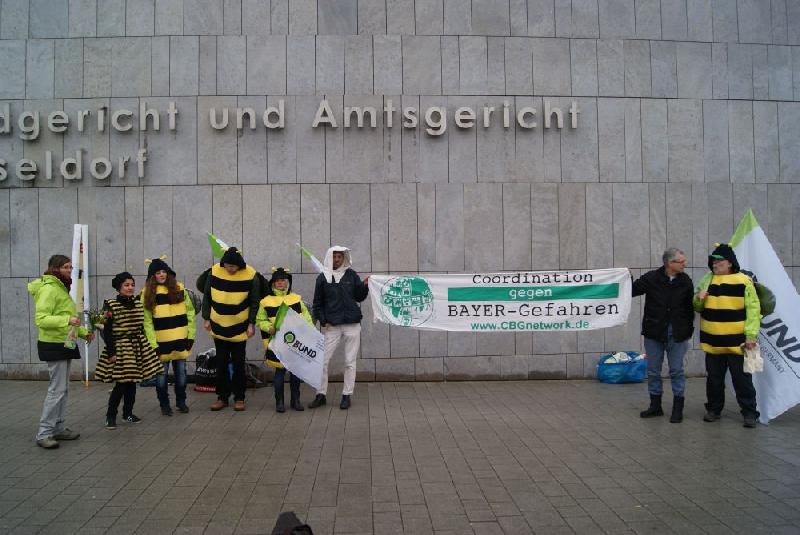 „Victory for Bees and Freedom of Speech“

A judge has ruled on Wednesday that the environmental association BUND (Friends of the Earth Germany) has a right to voice concerns over potential harms to bees from a neonicotinoid pesticide, Thiacloprid. The judge at the Duesseldorf Regional Court revoked a previous injunction in favour of BAYER CropScience. Thiacloprid is used on crops such as oilseed rape and apples and is sold to the public in garden bug-killing products.

According to BUND, there is scientific evidence that the substance can make bees more likely to die from common diseases and can impair their navigational abilities. By printing a "not toxic to bees" logo on products containing Thiacloprid there arose "the suspicion of a deliberate deception of the consumer by BAYER." Friends of the Earth is now asking the European Commission to take a precautionary approach by suspending all uses of Thiacloprid and to review its safety. The environment charity will be contacting retailers asking them to stop selling products containing the substance.

Philipp Mimkes, spokesperson of the Coalition against BAYER Dangers, congratulated BUND and announced protests at the upcoming BAYER shareholder meeting in May: “Bee mortality puts the world's basic food supply at risk. However, the BAYER board has done nothing to ensure that these dangerous pesticides are withdrawn from the market to protect nature and biodiversity. For this reason, the actions of its members should not be ratified.“

A paper published in the Journal PLOS ONE confirms that Thiacloprid, along with the neonicotinoids Imidacloprid and Clothianidin, affects bees' navigational ability and behaviour, making it harder for them to find their way back to their hives. It also shows that exposure to the substance can increase the likelihood of honeybees dying if they are already infected with diseases. A scientific paper by Professor Randolf Menzel used in evidence by BUND, says: “Sublethal doses of neonicotinoids interfere selectively with the homing flight component based on this cognitive map memory, reducing the probability of successful returns to the hive. Chronic exposure to the neonicotinoid Thiacloprid reduces the attractiveness of a feeding site and the rate of recruitment."

Findings by toxicologist Dr. Henk Tennekes suggest that bees are not the only victims: “The risks of the neonicotinoid insecticides Imidacloprid and Thiacloprid to arthropods in water and soil may be seriously underestimated. The acceptable limits are based mainly on short-term tests. If long-term studies were to be carried out, far lower concentrations may turn out to be hazardous. This explains why minute quantities of Imidacloprid may induce bee decline in the long run.” Dr. Tennekes demands an immediate ban on the products.