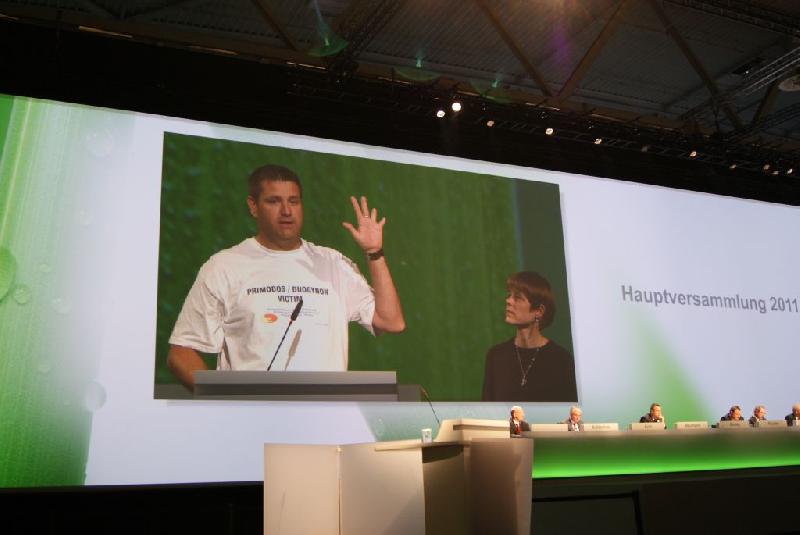 John Santiago speaking in the meeting 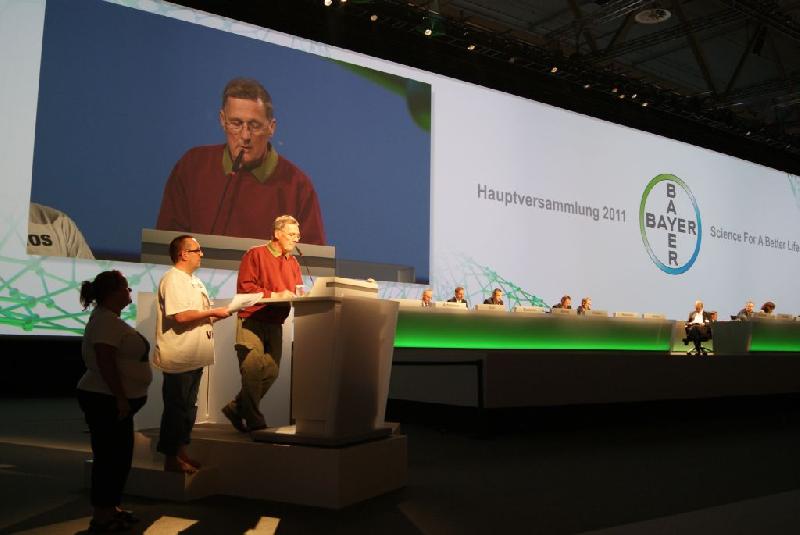 all information about the campaign

Good Afternoon my name is John Walmisley Santiago. I was born in London in 1968. I am now 43. I am one of your victims of Primodos/Duogynon, and have deformities caused by your drug.
Is there anyone in this room who cannot understand English ? I am going to speak for 3 minutes.
We now have overwhelming evidence from yourselves.. Bayer.. to prove your company was negligent in prescribing this medicine to pregnant women containing the same chemicals as your anti baby pill only in a very high dosage.
Why would you give a pregnant woman 2 whole packets of an anti-baby pill ?
What did you think would happen to the baby ?
1000s of babies died and 1000s more were born deformed, those who survived are now adults and live with terrible deformities similar to those who suffered from the drug Thalidomide.
Governments banned your drug, specialists warned you, the media told you to stop.
Your own testing records prove that you knew about the risks and yet continue to issue the drug.
Your own internal doctors and specialists advised you not to proceed with the drug testing.
Now 40 years later you still try to refuse your responsibility.
You still refused to accept liability.
Are you hoping we will all just disappear and be quiet ?
In the court in Berlin a few months ago, you had an opportunity to accept responsibility yet instead your clever lawyers found a way out using a technicality – Claims must be made within 30 years. This rule does not apply in England nor at the European Court in Brussels or the International Court of Human Rights.
Bayer recently carried out an internal investigation and report, where you decided to vastly lower the dosage and then offered this as evidence to the courts in Berlin as your proof that you are not liable.. Why did you not test and report on the correct dosage level ?
Bayer has a reputation to maintain, and shareholders to please, the business market expects openness and honesty and accountability.
40 years of pain is enough time to come clean and help the victims you caused.
Wake up Bayer ... help your victims.
Does anyone have a question they would like to ask me ?
Or why not come over and talk to me or just pick up one of our leaflets written in German or English
Thank you for listening

My name is Karl Murphy from Liverpool, England. A number of you will remember me from the AGM in 2009 and 2010 were I talk about the drug Primodos/Duogynon. I ask you before you stand up and leave this room just listen to the information that I hold about this drug.
Bayer has always denied that this drug never did any damage to us, they also say that they have looked at research and there was never any proof. Bayer have also put statements on the internet to say that this drug was not the cause to all are deformities, I ask Bayer why has that statement been removed from the internet? I have a copy of this statement. Why is Bayer not willing to open there file to the German victims and they decide to hide behind barred time? I ask you shareholders and Bayers board to just look at what I hold in my hands. This is Bayer Scherings 300 page own confidential file on the drug Primodos/Duogynon, there are letters in here on letter headed paper and are signed by there own Medical Director Professor Michael Briggs, Dr Lachnit, Dr Laudahn, Dr Laengner, Dr Dietrich, Dr Matern Dr Pitchford & Dr Bye, all these people worked for Scherings and have all signed these headed letters that we hold today. All these Drs were aware of the damage Primodos was causing, Professor Michael Briggs says in a confidential letter dated November 1967 “we are here dealing with a pharmaceutical product taken by women that may be capable of altering the chemical environment of the foetus and I think we will have to be ultra cautious in this matter. This letter shows that there own Medical Director knew the damage Primodos/Duogynon was doing to the foetus, and is signed by Professor Briggs. Why was the no action taken by Bayer Schering to put a hold on this product until further tests had been carried out? Why was this product still being given to pregnant ladies as a pregnancy test from 1967 until 1975 when you knew the damage it was causing? Another letter dated January 1974, again on headed paper and signed by Dr Laengner and Dr Dietrich says “ Primodos oral contains Norethisterone Acetate which nevertheless possesses an androgenic effect even though extremely slight, this hormone should not be dispensed if a pregnancy exists and the dispensing occurs possibly in a critical phase of organ development. You have heard from only two letters from this file I have and there are a lot more letters like that. This drug company knew what damages they were doing to all these victims. Some of you will have copies of these letters that I have handed to you on the way in.
Even in todays Products that Bayer make they confirm that Norethisterone which is a Progestin can harm the baby and should NOT be given to a pregnant lady. The high dosages of Progestins that was in Primodos/Duogynon were equal to a lady of today taking 156 contraceptive pills in 12 hours to test if she was pregnant.
I go back to Professor Briggs who signed letters in this file. On the 28 September 1986 The Sunday Times in the UK reported on Professor Briggs and the headlines were “The Bogus Work Of Professor Briggs an investigation by The Sunday Times into the research of Professor Michael Briggs, one of the most influential international experts on contraceptives and an advisor to the World Health Organisation, has revealed scientific fraud on a large scale. I ask Bayer did Professor Michael Briggs do tests on Primodos/Duogynon or were these tests faked as well? This story can be found on the internet but be quick as Bayer will probably have this removed.
A letter Bayer sent me on 23 September 2009 Bayer have said “Scherings changed the labelling of Primodos in 1970 after which Primodos was indicated for secondary amenorrhoea BUT a letter which is in this file and dated January 1974 and is on headed paper and signed by Dr Mater says “Attached here to is the text of the new instruction-leaflet enclosure for Primodos oral. This text will immediately be included with all packages of this preparation I ask Bayer why in the letter you sent me you say the change of labelling happened in 1970 but your own paperwork signed by your own Doctor confirms it only happened in 1974? There is a 4 year difference to what you say and your own paperwork.
Mr Steve Painter and Mr Oliver Renner of Bayer have been offered to look at this file and have been contacted on a weekly basis over the last 8 weeks but no reply has been received from them.
In 2009 Mr Werner Wenning said that he supported Disabled people, this is not the case they make disabled people and then leave them. In 2010 a number of victims entered the Bayer 10k race in Newbury in the UK, we walked this course and arrived back at the finish in 2 hours, Bayer had the organisers of this race to clear up and not wait for the disabled victims to finish, if you would like to see this go onto facebook and look at our site primodos/duogynon. We have entered this race again and will be handing papers out of this file to the public and the media.
My final question to Bayer, Why have you dropped the name Schering? Is this because of the embarrassment of this drug and the effects it has left all these victims with?
Thank you for listening