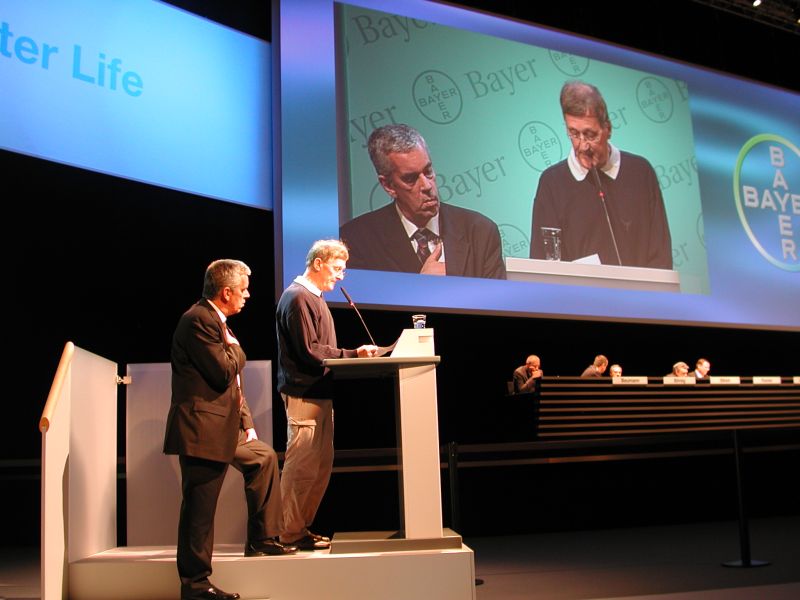 Alfredo Pequito with his interpreter in the meeting

In 1997 Pequito informed the public that pharmaceutical companies in Portugal are bribing thousands of doctors to prescribe their products. He collected the names of nearly 2,500 Portuguese doctors who have been induced with gifts including cash and travel vouchers to prescribe Bayer drugs. Bayer also conducted unethical medical tests in Portugal, some test persons died.

Alfredo Pequito says: “As soon as I started my work for Bayer I was informed that a high amount of money was at my disposal that was supposed to support and help doctors in their activities. This amount would be available whenever requested. The General Health Inspection verified later on, that for example in 1997 Bayer Portugal spent between 5-10% of their profits in this type of activities. And today there is even more money involved, including direct cash payments or high priced gifts, depending on the service returned. He will ask the board to disclose the outcome of all clinical studies conducted in Portugal. „What directs this company to “buy medical prescriptions? Does Bayer simply not trust their own products? I hope that the Bayer board will have the courage and nobleness to answer all these questions.

Pequito appears in the Bayer meeting by invitation of the Coalition against Bayer Dangers, an international network based in Germany that has been monitoring Bayer for thirty years.

=> An interview with Alfredo Pequito

=> The portuguese paper Expresso reported about deadly tests with Bayer´s medication Escadotril. Please find the article in English and Portuguese

=> In 2000 Pequito narrowly escaped an attempt on his life. This is an article in The Guardian.