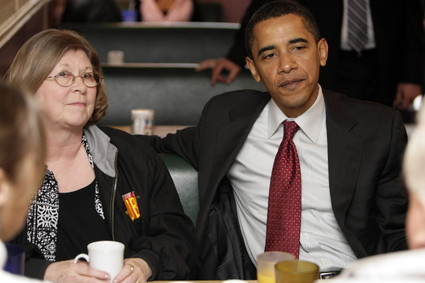 
That buzz in Obama's pocket

SOUTH BEND, Ind. – Sen. Barack Obama did not want any misunderstandings as his phone rang while posing for a few photos with two waitresses and the owner of the Sunrise Café here.
"That's my phone buzzing there," the Illinois Democrat explained, as he leaned in for a picture, touching his leg to one of the older women. "I don't want you to think I'm getting fresh or anything."
It was Obama's first stop today in Indiana, where he is now holding a town hall meeting heavy on an economic message at a high school in Gary.
“Looks like the breakfast here is pretty good, he said, gazing over an order of another mans biscuits and gravy. Then, he took his pre-arranged seat in a booth with three people.
For about 20 minutes, Obama talked with three Hoosiers sitting in the booth: Marvin Kline, 61, of Mishwaka; Lisa Fletcher, 32, of South Bend; Trudy Manderfeld, 60, of Shipshewana. The guests were selected by the campaign.
Kline said he worked at RMG Foundry in nearby Mishwaka until it closed in 2006. After 38 years at the plant, he said, suddenly he was out of work.
“All it is, Kline said, “is corporate greed – to see how much money you can make off of people.
“Wheres the bottom line? When is this going to stop? he added a few moments later. “Why are we letting the Japanese and the Chinese buy our debt from us?
Obama sat and listened, nodding in agreement. Obama then criticized the White House for failing to “close the gap between the people who are looking for work and the jobs that exist.
Then, he heard a similar tale from Manderfeld, who worked at a Bayer plant. She, too, lost her job, when the company closed its doors. The economic downturn and loss of jobs in the manufacturing sector, she said, has shattered lives and devastated the way of life in many communities.
Again, Obama listened intently and asked a few questions. He sympathized with their plight, but warned: “The economy is changing. Not all those jobs are going to come back. He talked, in broad terms, about proposals to retrain workers and create new opportunities in new fields.
“Im not guaranteeing that we can turn this around overnight, Obama said.
“I hope people realize that because of the damage that has been done, Manderfeld said, “its going to take to more than one term to even start to turn it around.
“Yeah, exactly, he said with a smile, “Im looking for two.
“Are ya? she said.
“Im going to start on that first one, he replied.
(Later, she told reporters that she intended to vote for Obama in the Indiana primary on May 6. “I think theyre both capable, but I think hes maybe more in tuned with real people, she said.)
As the conversation began to wrap up, Obama talked briefly with Fletcher, who is a waitress. She said the economic slowdown has affected her, too. “People dont have the money to come out do a full dining experience, she said.
“People cant go out and get a steak diner, Obama said in agreement.
“Absolutely, she said. by John McCormick

ELKHART, Indiana--Some 400 Steelworkers and supporters marched here January 29 to protest plans by the Bayer Corporation to close their Consumer Care Division and lay off up to 550 workers. The workers are members of USWA Local 12273 and produce Alka-Seltzer and several vitamin products.
"I'm going to keep fighting until the last light is turned out," union member Dale Nye told a rally at the end of the march. The local is planning a protest at Bayer's U.S. corporate headquarters in Pittsburgh some time this summer.
Bayer executives announced late last year that the Elkhart facility would be phased out by the end of 2003 and the production shifted to plants in Pennsylvania, Germany, and Mexico. One new Bayer plant was built in Mexico in the early 1990s in anticipation of expanded sales. When the Mexican currency, the peso, collapsed in 1994 however, Bayer sales there dropped by 30 percent.
The latest plan to cut jobs comes after the USWA had made extensive concessions to the bosses' profit demands over the past decade, including wage cuts and job combinations. Employment at the sprawling Bayer complex in Elkhart has fallen from 3,000 to 2,000 today.
Trudy Manderfeld, Local 12273 president, reported on her recent trip to Bayer headquarters in Leverkusen, Germany. She said corporate officials would not meet with her, but she got a better response from officials of the German workers unions at Bayer who sent a solidarity message to the rally protesting the plans to close the Elkhart facility.
"Don't fall into the trap of being played off against each other," the message said. "Why would German workers want U.S. workers laid off? Something is wrong in the system." The German union appeal was especially noteworthy since unemployment there and in Mexico is much higher at this time than in the United States.
Bayer's plans pose a challenge to working people in different countries of how to unite in a genuine fight against devastating unemployment as the bosses continue layoffs to boost profits. USWA officials, however, organized the January 29 protest along lines that promoted an America-first chauvinist appeal. "Keep Speedy in the U.S.A." was the main theme of the many placards printed for the march and rally. Other placards read, "No go Mexico."
USWA District 7 assistant director Jim Robinson blamed "unfettered world trade" for causing "good paying jobs to go overseas." He praised the recent WTO protests in Seattle, where USWA of other top union officials pressed the U.S. government to implement protectionist policies that benefit particular groups of U.S. capitalists.
Some workers in the march did point out other facts about the challenge they faced. The production and distribution operations the bosses have already shifted from Elkhart have gone to other U.S. facilities--most of them lower paid and nonunion.
Harvey McArthur is a member of United Food and Commercial Workers Local 100A in Chicago.