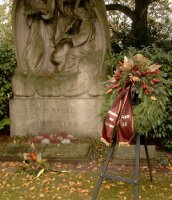 BAYER continues to refuse to openly distance itself from the convicted war criminal Fritz ter Meer. On All Saints Day the company again had a wreath laid on ter Meers grave in Krefeld-Uerdingen (Germany).

Ter Meer, born in 1884, was a board member of IG Farben from 1925. During the Second World War he was responsible for the construction of the IG Farben factory in Auschwitz, in which around 30 000 slave labourers went to their deaths. In July 1948 at the Nuremberg IG Farben trial ter Meer was sentenced to seven years in prison for enslavement and looting. During questioning he maintained that no specific suffering was inflicted on the slave labourers “because without this they would have been killed anyway.

After his release from prison, ter Meer became Chairman of the Board of BAYER. After his death in 1967 Bayer named a student support foundation the “Fritz ter Meer Foundation.

Axel Köhler-Schnura from the Coalition Against BAYER Dangers: „It is unacceptable that BAYER honours a war criminal like Fritz ter Meer and at the same time refuses to adequately and justly compensate the victims and their descendants. BAYER must face up to its share of the responsibility for the Nazi reign of terror, the war and slave labour. Köhler-Schnura points out that for decades BAYER refused to pay compensation to surviving slave labourers. Only when international protests threatened the companys reputation did it hesitantly agree to pay damages - more than 50 years after the end of the war.

David Rosenberg of Pittsburgh, who chaired the Committee for Appropriate Acknowledgment, adds: “It is an outrage to the victims of policies Fritz Ter Meer helped implement for Bayer to lay a wreath at the grave of a convicted Nazi war criminal. The company's belated and reluctant participation in a compensation fund for former forced laborers cannot posthumously exonerate Ter Meer or Bayer for their wartime activities. Dirty hands do not suddenly become clean. The Company which continues to lay wreaths for him sets its own company priorities up as superior to the Nuremberg War Crimes Court and the judgment of humanity. Rosenberg has been looking into Bayer's role for years. The committee began work in 1998 as a response to contributions the Bayer Foundation made to local Jewish organizations, including the Holocaust Center of the United Jewish Federation and the Jewish Community Center's capital campaign.

The Jewish Chronicle of Pittsburgh, January 11, 2007

A friend writes from Germany that a curious sight has been seen in a cemetery in Krefeld, not far from the world headquarters of the Bayer Corporation. Next to the grave of one of the company's former directors, shortly after All Saints Day (Nov. 1), a substantial wreath appeared. Ribbons attached to the wreath indicate it was from the "Supervisory Board and Board of Directors (Aufsichtsrat und Vorstand) of the Bayer Corporation (Bayer AG.)"
That the Bayer boards would recognize a former officer would not seem unusual, but in this case, the individual so honored was the Bayer chemist and I.G. Farben executive Fritz ter Meer. Ter Meer's Nazi-era activities included supervising the construction of a slave labor camp at Auschwitz in which approximately 30,000 persons, mostly Jews, were worked and starved to death.
Ter Meer's role in creating the slave labor camp at Auschwitz is widely known. The Nuremberg War Crimes Court at the I.G. Farben trial in July 1948 sentenced a number of German captains of industry to prison terms. Ter Meer was charged and convicted of plunder and enslavement and served a seven-year term.
Why is the Bayer Corporation placing a wreath at the grave of a convicted Nuremberg war criminal?
My friend also points out that there is a Fritz ter Meer Educational Foundation which is administered through the Bayer offices at the company's headquarters in Leverkusen. The foundation offers scholarships for graduate studies in chemistry.
By expressly honoring a man whom the Nuremberg court found guilty of war crimes, the Bayer Company demonstrates it has not learned from the past. As Jews we should let Bayer know that we are appalled by tributes paid by the company to the likes of Fritz ter Meer.

(Editor's note: The author is the former chair of the Committee for Appropriate Acknowledgement, which researched Bayer's corporate culpability for the Holocaust between 1990 and 2003. In response to a Chronicle request for comment Bayer issued the following statement:
"It is important to understand the fact that between 1925 and 1951 no company named "Bayer" existed, either as a subsidiary of I.G. Farben, or as any other legal entity. I.G. Farben used the brand name "Bayer" and the Bayer cross logo on all of its pharmaceuticals and over-the-counter medication, including products originally developed by predecessor companies other than Bayer.
"Bayer as a company was only re-established by the Allied High Commission in 1952. The legal successor to I.G. Farben still exists as a publicly traded company today.
"Even the most senior members of Bayer's management and workforce today were young children or not even born when the terror of the Nazi regime ended, and peace was restored. Like everybody else we are deeply aware of the historical burden Germany carries as a nation.
"In view of this history, the German, U.S. and other governments entered into international agreements providing for the establishment of an international foundation which provides financial means to forced laborers and others who have suffered. The foundation has already distributed approximately 4.5 billion Euros to more than 1.6 million victims. DM 5 billion (today: approx. 2.5 billion Euros) was contributed by German companies. Bayer has made one of the most substantial contributions.")

We can probably leave it to the philosophers to discuss what it means to exist or not exist. I was merely posing two very specific questions neither of which the companys statement addressed:

--- Why, three months ago, in November 2006, did the modern Bayer Corporation place a wreath from the "Bayer Board of Trustees and Supervisory Board" at the grave site of convicted Nuremberg war criminal Fritz ter Meer?

--- Why does the post-1952 Bayer Corporation currently administer a scholarship fund named for this same individual?

Bayer pleads that its current employees had no part in these dark deeds and should not be judged by them. I agree. But, in honoring a dead Nuremberg war criminal with a wreath, it is the 2006 Bayer Board of Directors, not I, who betrays and misrepresents their employees' values and sensitivities.