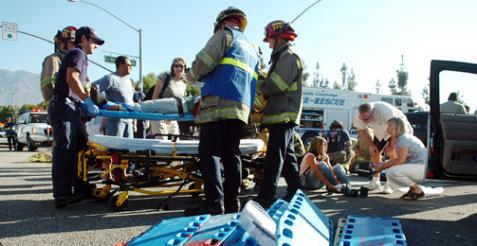 injured workers are brought to hospital

FRANKFURT - An anti-Bayer pressure group has challenged the German chemical giant to produce TDI plastics without using poisonous phosgene gas following an explosion at a US Bayer plant which injured 22 people.
The Germany-based Coalition Against Bayer Dangers said: "We are challenging Bayer to set up a phosgene-free TDI production plant. Bayer needs to assess whether a similar explosion could happen at its German (TDI) plant (in Dormagen)."
Nobody was seriously injured in the explosion on Tuesday at Bayer Material Science''s plant in Baytown, Texas.
The cause of the blast, which is still unknown, is being investigated by a team of international experts, Bayer said earlier.
The incident follows an explosion at the Bayer''s Baytown unit in 2004, which an internal investigation determined was caused by an over-concentration of feedstock chemicals.
Phosgene, also known as carbonyl chloride, is a toxic gas used as a chemical weapon during the World War I.

FRANKFURT - Bayer AG said US regulatory agencies are investigating an explosion at a Bayer Material Sciences plant in Texas that hospitalised 22 workers, and the cause of which is still unclear.

None of the workers and contracters involved in the incident in Baytown on Tuesday morning received serious injuries, a Bayer spokesman said. All were discharged from hospital on the day they were admitted.

'A team of international experts is at the scene to determine the cause of the explosion .. At the moment it is too early to say,' he added.

The blast occurred in a tank at one of Bayer's two toluene diisocyanate (TDI) units. The explosion also damaged a tank containing ammonia, resulting in a slow release of the harmful substance, said a spokeswoman for the Texas Commission on Environmental Quality.

The investigation is expected to take several weeks, a spokeswoman for the Occupation Safety and Health Administration said.

Philipp Mimkes of the Coalition against Bayer Dangers said: 'A similar explosion could happen at Bayer's Dormagen plant (in Germany), so it is essential that Bayer improves its procedures for health and safety of its workers and for people living near the plant.'

Tuesday's incident follows an explosion at Bayer's chemical plant in Baytown in 2004, which an internal investigation determined was caused by an over-concentration of feedstock chemicals. Nobody was injured in that incident.

Materials produced at the plant are used for dashboards, bumpers, music CDs and easy chairs.

Bayer Hit With Lawsuit After Explosion

HOUSTON - A law firm representing 19 workers injured in an explosion at a Bayer MaterialScience plant near Houston on Tuesday filed suit Monday charging the company with lax safety standards which caused the explosion.

The explosion, which occurred last Tuesday at a plant in Baytown, Texas, shut down one of the facility's two toluene diisocyanate production lines. The line remains down and the company has not calculated its financial impact. Toluene diisocyanate is used to manufacture flexible polyurethane for use in items like upholstery, mattresses and car seats.

The suit was filed by the Williams Baily Law Firm. The law firm claims the explosion happened when toluene diisocyanate was mixed with another toxic chemical. "Had appropriate safety measures been in place, this explosion never would have happened," said Byron Buchanan, attorney at Williams Bailey. Mr. Arnulfo Cantu, one of the workers being represented, is a scaffold-builder who was working below the unit when it exploded. He was hospitalized for burns to his head, shoulders and back. The law firm said it also filed a restraining order to prevent the company from altering or destroying the scene.

Bayer said on Friday a team of experts was sent to investigate the explosion with local authorities. Inquiries to Bayer's German offices seeking comment on the lawsuit were not immediately returned. Bayer MaterialScience AG is a division of the German conglomerate Bayer AG.

Williams Bailey recently settled more than 150 injury cases with BP PLC in connection with an explosion at its Texas City, Texas, plant in March 2005. Fifteen people were killed and hundreds injured.

A lawsuit filed last week against the Bayer Material Science plant in Baytown alleges the “tragic but unnecessary explosion last week in one of the plants toluene diiocynanate units was caused by the companys unsafe practices.

The Sept. 26 explosion in a process vessel, or tank, sent 21 workers to San Jacinto Methodist Hospital for decontamination and treatment for exposure toluene, and another to Memorial Hermann Hospital for treatment for second-degree burns.

An attorney for the plaintiffs said Monday there is information indicating plant officials were having problems with the TDI unit before the explosion but did not warn contract workers near the unit.

Byron Buchanan, one of the lead attorneys, said the two are “representative plaintiffs that were necessary for a lawsuit to be filed in time for the firm to seek a temporary restraining order to preserve the scene of the accident.

District Judge Chap B. Cain granted the restraining order in a hearing on Friday, said Buchanan. A second hearing, in which the firm will ask for a temporary injunction, is scheduled for this Friday. If granted, the injunction would give the firm more time to conduct an onsite inspection, including taking photographs, he said.

The complaint states that the process vessel was being used to mix toleuene diisocyanate, or TDI, and orthodichlorobenzene. The complaint alleges that “on information and belief, phosgene, also a deadly chemical was being mixed with the two other substances at a very high temperature.

Buchanan said the firm has not confirmed the presence of phosgene, but an engineering consultant has said that it would not be uncommon for it to be used in the particular process.

The companys initial report of the incident to the Texas Commission on Environmental Quality stated that 3,066 pounds of ammonia and 272 pounds of orthodichlorobenzene were released in the incident. The report lists “over pressure of equipment as the incidents cause.

A TCEQ spokeswoman said later that less than 1,000 pounds of ammonia was released. There was no offsite impact, she said.

Buchanan said the firm has only very preliminary information.

“We havent had an opportunity to go in yet and inspect the premise yet, which were working on presently, he said, adding he does not expect Bayer officials to resist the firms efforts to do an onsite inspection.

The complaint alleges that the explosion was caused by the “negligence and gross negligence of the plant by failing to enact and enforce appropriate safety rules, regulations and practices.

“At the very least, it is our understanding that they were having some problems with the unit during the day prior to the explosion. They failed to warn any of the contract workers who were working around it, Buchanan said.

He said the “first notice the contractors had of any problem was when the explosion occurred at approximately 11:30 a.m.

The lawsuit seeks unspecified damages for past and future pain and suffering, mental anguish, and lost earnings or earning capacity, among other things.

Cherie Laughlin, spokeswoman for the plant, said the company had not yet been served a copy of the complaint.

“Until that occurs, and we have time to analyze the document, we cannot comment, she said.

TCEQ and the federal Occupational Safety and Health Administrations are conducting investigations of the incident, as is an international team of Bayer experts. The TDI unit involved in the explosion remains shut down.