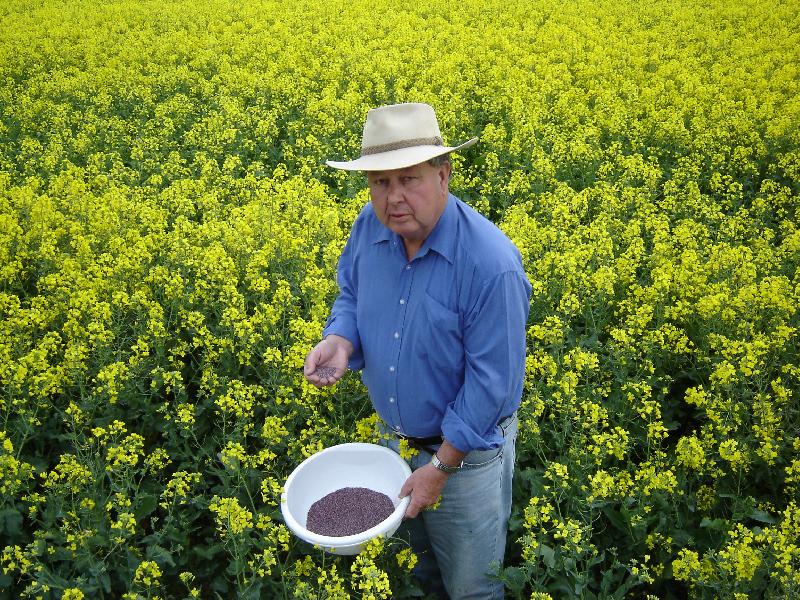 The first confirmed case of genetically engineered (GE) contamination in a field of commercial canola has struck a Victorian farmer. The incident opens up a legal mine-field for farmers and threatens Australian export markets.

Geoffrey Carracher, a Canola farmer from Wimmera, Victoria, accepted a Greenpeace offer to test his canola seeds at an independent lab. The seeds were found to be contaminated with Bayers Liberty Link gene at a level of 0.5%. This is 50 times higher than the original Liberty Link contamination found in June. Alarmingly, the 'Grace' seeds he purchased were also sold to farmers across three states, creating serious legal and financial problems for them.

"I am devastated. My 64 hectare crop worth $48,000 is now at risk. Any farmers who sowed Grace canola face the same risk and need to get their crop tested," said Mr Carracher.

Greenpeace has begun testing canola seeds for GE contamination because State Governments, seed companies and the biotech industry have failed to take decisive action to stop the spread of GE. "Testing seed samples from farmers should have been done months ago, by industry and government," said Greenpeace GE campaigner Jeremy Tager. "Laboratory analysis takes 3-5 days. Contaminated canola varieties could have been identified within a matter of a few weeks, and a plan developed for protecting farmers and our food shortly after that."

"The GE industry insists that we must all accept this sort of contamination, when it is a direct result of their incompetence and lack of care. They want to convince us that we can 'be a little bit pregnant', in reality any level of contamination threatens Australias GE free status," said Tager.

Greenpeace opposes the release of genetically engineered plants into the environment because it will create a new form of biological pollution that is extremely difficult to control and whose impacts are
virtually unknown.

Mr Carracher, who is dedicated to being and remaining a GE-free farmer, wants the company that owns the GE product to be held accountable. "I want Bayer to take responsibility - they own the patent and they get the profit, so it's only fair that they should be liable for what happens to farmers like me."

Greenpeace proposes an action plan that would address the current crisis. It includes: comprehensive testing of seed stocks; a farmer protection fund to cover farmers costs, and strict liability for GE products, so that holders of the patent are held responsible for harm and contamination caused by their product.

A delegation of farmers from the Network of Concerned Farmers (NCF) protested at Bayer Cropscience headquarters in Melbourne today. Farmers delivered samples of canola to be tested and asked Bayer Cropscience to "remove their trespassing genes" from their properties. (Letter Ref 5)

"The industry can not just ignore contamination until after we deliver our harvest and farmers can't accept any contamination if we are to be liable for the economic loss or additional costs caused by it," insisted Geoffrey Carracher, NCF spokesperson and Victorian farmer from Minimay. "It's a moratorium and it is Bayer Cropscience's responsibility to recall their unwanted GM product just as it would be our job to collect our sheep if they wandered on the road or on to another farmers property."

Since the contamination scandal was announced in several states, an industry task force has been established to routinely test seed samples and the protocol adopted involves growing the samples and spraying it with the chemicals the GM crop is resistant to. Only GM crops would survive and further testing would be done on positive results. The testing procedure would take at least 8 weeks. (Ref 4)

"Farmers need to know if we have contamination as we will be signing to guarantee there is no contamination in our seed when we deliver it. We can't wait a few months for a test and Bayer Cropscience were meant to have a better test than that." The Office of the Gene Technology Regulator (OGTR) imposed a condition of license on Bayer Cropscience to provide a testing methodology that is able to reliably detect the presence of each of the GMOs or their genetic material. The NCF contacted the regulators office but were told that the testing information was "commercial in confidence." (Ref 2)

"It is commercial incompetence not to have an accurate field test when these varieties were planned to be released and coexist with non-GM varieties. How can we tell if we have contamination when there is no test available for it?" asked Mr Carracher. "In order to deflect the blame to seed imports, Bayer Cropscience reported on the ABC yesterday that the variety Topas 19/2 was only grown in Tasmania but the OGTR site reveals this variety was included in trials in all the states that have reported contamination." (Ref 3)

2. OGTR condition of license: Under Section 15 of the Conditions of license imposed by the Office of the Gene Technology Regulator on Bayer CropScience Pty Ltd for the Commercial release of InVigor(r) canola (Brassica napus) for use in the Australian cropping system DIR 021/2002 released 25th July 2003: http://www.ogtr.gov.au/rtf/gmorec/dir021lic.rtf
"15. The licence holder must provide a written instrument to the Regulator describing an experimental method that is capable of reliably detecting the presence of the GMOs covered by this licence and any transferred genetically modified material that might be present in a recipient organism. The instrument must be provided within 30 days of this licence being issued."

"Specific condition 1 requires the licence holder to provide a testing methodology to the Regulator that is capable of reliably detecting the presence of the GMO."

3. Comment re Topas 19/2 trials: See ABC Country Hour" Reference: http://www.abc.net.au/rural/vic/today.htm "Samples of the genetically modified canola known as Topas 19/2 have been found in all three states; a variety that has only been trialed once, back in 1998 in Tasmania." ... "In that interview Ms O'Neill told us the GM variety Topas 19/2 had been grown in trials at Horsham in 1997. So when we heard the variety was grown in trials in Tasmania, we contacted Bayer for some clarification. Ms O'Neill informed us "subsequent investigations by Bayer Cropscience have revealed that the variety Topas 19/2 was not grown in trials in Horsham, or indeed anywhere in mainland Australia." Bayer have confirmed the variety was trialled in Tasmania, but was not able to say exactly where."
http://www.ogtr.gov.au/rtf/ir/dir021finalrarmpsum2.rtf
"Under the former voluntary system overseen by the Genetic Manipulation Advisory Committee (GMAC), Bayer (formerly AgrEvo, Aventis CropScience) conducted 14 field trials (PR62, PR63 and extensions) with all seven GM canola lines in Queensland, New South Wales, Victoria, Tasmania, South Australia and Western Australia. In addition, the Regulator issued a licence on 30 July 2002 to Bayer (DIR010/2002) to conduct a limited and controlled release of the same GM canola lines at 30 trial sites, totalling 106 hectares, in New South Wales, Victoria and South Australia for the summer and winter growing seasons in the three years from 2002-03."

Please accept these canola seed samples which may be contaminated with your patented GM Invigor varieties.
The OGTR licence includes a condition that "requires the applicant to provide the Regulator with a testing methodology that is able to reliably detect the presence of each of the GMOs or their genetic material." This condition of license was to be provided to the OGTR within 30 days of approval of the license. The Office of the Gene Technology Regulator claims this information is "commercial in confidence" which restricts industry's ability to test for GM varieties.

Due to the following series of events, it is imperitive for farmers to know of the GM status prior to delivering our seed at harvest.
- The detection of Bayer Cropscience's Invigor Topas 19/2 variety in non-GM seed in Victoria, West Australia and South Australia.
- The delivery requirement for farmers to sign to guarantee there is no GM in our harvested seed.
- The moratorium in all major canola growing states restricting the planting of GM canola crops.
- The market preference for no GM contamination.
- The proposed inadequate "industry" protocols which involve a testing process taking months and involving growing out the canola seed and spraying it with glufosinate ammonium.
- The inadequacies of both State and Federal legislation in fairly managing the liability caused by GM contamination.

On behalf of all Australian farmers not wanting to accept GM canola contamination and not willing to accept liability for any costs arising from contamination with GM canola, the Network of Concerned Farmers is hereby insisting that Bayer Cropscience commence rigorous testing for the presence of Bayer Cropscience's GM product and remove any GM crops from the land of farmers wishing to maintain a "GM-free" status as per intention of State moratoriums.

Farmers wishing to market our product as non-GM REFUSE TO ACCEPT any economic loss caused by your GM product.
We request that Bayer Cropscience:
- Test seed samples for the presence of Bayer Cropscience's GM Invigor canola varieties.
- Fax the results of the test within 10 days to 03 5386208 or send to the address above within 10 days.
- Sign below to acknowledge receipt of the seed samples and this letter.

Thank you.
Yours faithfully,
Geoffrey Carracher